Voting, trees on a quilt, and courage. 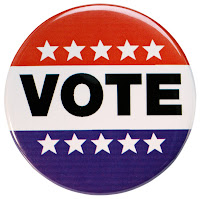 The entries are in, and the voting has started. NO,not for  the US President , but over at

this is the link  for you to  hop over there to vote.    This is open to everyone, anyone, not just those of us who participated with a cat, dog,or other animal,or a pet themed quilt photo.There are some beautiful cats there, and as I am a cat lover, listed them first.Then the dogs, soft coats, expressive eyes, and with their mates or siblings. Then the pet themed quilts, I am left in total awe at those.

Here is one  more pic  of the two latest gingers in our family For any new readers of my blog, once upon a time we had 5 cats. One by one, they left us, and new ones arrived. Max is the largest, fluffiest, gentlest ginger boy I have met.Then there is Boris, the tiny fellow who arrived last year on our back doorstep  late one night. He has grown to be the “warrior” his name depicts.We have always wondered if indeed Max is his Dad? Here he is with the same question!!!

Meantime, I have made some progress on the “Mod-ified Tree”, and it isn’t alone, the surplus strips are on 6 placemats,  The binding is the only part left to do.

The strips are on, one edge is done,others trying hard not to blow away in the wind.

I decided this would be a table runner, and need to embellish the centre with some more striking wavy lines like rays of sunshine, as a Christmas down here is in summertime.And  the  binding will be my favourite flange, blue  top fabric,  with a tiny peep of dark navy for  contrast.

We have gale winds, no damage, sunshine above, daffs flowering, and snowdrops blooming.

This week, we heard news of a courageous lady who spent more than 4 weeks alone in a hut in a very remote part of the South Island.

Pavlina  Pizova and her partner, Ondrej Petr, were tramping on the Routeburn Track, when he fell and became trapped. Pavlina made her way down,  sadly he died. After 2 days in the open, Pavlina tramped through waist deep snow to reach the  warden’s hut at Lake Mackenzie, heavy snow covering all the track markers. Avalanches roared outside, she had frozen feet with frostbite, and this very brave courageous lady stayed there, defying all odds, managing to survive on the rations left there, until a message on Facebook alerted people . She made an “H” in the snow with ashes from the fire.

Pavlina  publicly thanked  DOC, SAR teams and police  for her rescue and the recovery of Ondrej’s body, and Mrs Vladka Kennet, Honorary Consul, from Queenstown , for all her support.

I admire her with all my heart, and wish her a safe return to her home country of the  Czech Republic.

The recovery team on the Routeburn Track, South Island. Photo Courtesy of the Internet and Police.

“Courage is not the towering oak

that sees storms come and go;

it is the fragile blossom that opens in the snow”

The Ginger Boys and a Silver Tabby

Over at  Lily Pad Quilting , …( hop there to find all the latest news and views for this show)  the fifth annual Pets on Quilts Show 2016 is under way. It was created by QuiltShopGal. There are several categories, and I have entered the one for Cats on Quilts.

As long as I can remember, there has always been a cat or two or more in my life. It began with Tuppence, a black and white  kitten,  when I was ONE..Then Fluff, a retired pedigree Persian, when I was in my  teens, and many more from then to now.

Felicity is the matriarch of our home, a silver tabby, now aged almost 18. She is asleep on her own knitted rug.

Then  in 2002, along came  Finn, a small ginger boy, who was so loved by our Japanese host daughter Mayumi.

Tom arrived, quietly, at night, to have a secret feed, and gradually came to stay for a night or two, then off again on his travels. He loved to lie somewhere high, and survey everything that was going on.This Mariner’s Compass wasn’t finished, but he liked to stretch out on it regardless. Here he is,May, 2009. 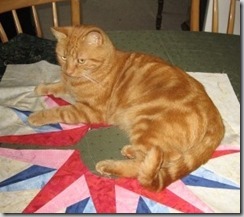 Not long after I took this next  photo, he left, early one morning, in April 2011,  and we didn’t see him again. 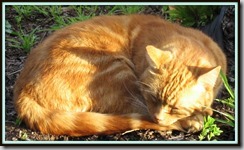 Last year, on Mother’s Day, 2015,  a tiny “Meow” at the back door .Outside the door was this ginger scrap, we think about 5 weeks old.  We called him Boris, which means “Warrior” in Slavic language. He was a lot of work in those first few months, a surrogate mother, or father, or both,  not  what I had thought was in my job description!!!,   He was  wonderful company for Hugh  who was waiting  for spinal surgery. He would be let out  of his overnight  LARGE  sleeping wooden box, early each morning,  and lie by Hugh,  or play on the purple fleece rug.

He found fun everywhere.We had always wondered where his Mum or Dad would be, then one day he met Max. Are you my Dad?

The other ginger in our family is Max , the darling of my heart.A stray, a big beautiful, maybe part Norwegian Forest boy, who began his nightly visits at 10.30 p.m., a quick dash in for a feed then off just as fast. Gradually over almost 3 years,  I can now  give him a brush when he feeds, hold his paw as he sleeps, and comb out the knots in his magnificent coat. Here is the first photo of him as he walked off down the track to the stream, in  January 2014.

The photo for my entry in the Pets on Quilts Show 2016 is one of Finn, on his own knitted small woollen quilt, on another hand knitted leaf pattern full size bed quilt.Jeanette, a  very dear friend, has her hand on Finn, company together.

Yes, this photo is also at the beginning of my post today. Both Jeanette and Finn have left this world, and we remember them with so much love, and wonderful memories.

My Mum-in-law Muriel had severe arthritis in both her hands, from many years ago, and her doctor had suggested to keep them supple she knitted. Well, everyone in the family, extended family, had a knitted bedspread, and then another. When she and my Father-in-law came to live with us, she continued to knit. But then she decided that each of our 5 cats needed their own. This was Finn’s.

Quotation of the day, an Indian Proverb

A little while ago there was a competition at

I think we needed to mention how long since we had rain. There were 133 entries, and my number was chosen. 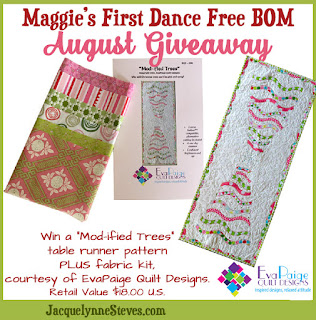 Instead, this great prize is going home with our winner from the random drawing!
Many thanks to Eva Paige Quilt Designs for providing the prize, and to Jacquelynne Steves, for coordinating the party and giving us the great block patterns!
Congratulations to Nancy J, from All Points of the Compass!
Enjoy your prize, and show it off when you complete it, OK? We'd love to see!

The pattern, the fabric, and beautiful BIC ( Like the Post-it ones in NZ down here)  sticky  notes from Jacquelynne Steves .

Then I laid out the pinks and greens, every one lovely. They are a little deeper colour than this, we have brilliant sunshine and 20 Celsius.. I can see I needed to alter the camera settings for this one.

I have chosen, for now, a pale blue background, just need to get some “ Misty-Fuse” and will be set to go.

Thanks again to Eva Paige Quilt Designs, and Jacquelynne Steves, I am thrilled!!

Spring is almost here, and the golden daffs are blooming  at the far end of the lawn.  I was told these are “ King Alfred”.

“ Every gift is special

when it is wrapped with thoughtfulness

and sent with love”

Weather, wether, and whether???

The wethers will have what I call “hunkered down” this week to get out of the snow, the wind, or the frost.so will all the other animals wherever they are.

For those of you not accustomed to farming terms…a baby sheep is a lamb, a female  sheep is a ewe, a mother sheep is a dam,  a male sheep( entire or intact) is a ram, and a castrated male sheep is a wether.

Onto the weather. with snow falls ranging from 10cm up to 70 cm( this is  28 inches) in both the South and North Islands. Many  roads  have been closed, school bus  morning schedules  delayed until the frost had started to melt, and a blizzard on the ski field about 2 hours north of us. A friend who lives between Taupo and Napier has  had a huge washout on the side road where they live, he says 3 buses could drop into it, and they have no access to a main road. I hope they have ample coffee and other necessities!!!

Tonight,a few magical moments in the western skies. I thought hard about whether I would venture out, gale southerly winds, freezing cold,  so quickly donned hat, neck warmer, Gore-Tex coat, and caught the last of that glorious red. Those colours change so fast, in those few moments the deepest red had almost all gone.

Inside, Joyce and I have been busy stitching, and some are by hand,some with the machine. Naturally Boris had to be in for the fun as well. The first two  patterns, or 3 photos, are from  Jacquelynne Steves “ Maggies First Dance BOM” .

The square box is a scrap and thread catcher, with machine thread stitching on 4 panels. An international lot of goodies… Calico from China maybe.  inside fabric from Japan, silk binding from Singapore, and this pattern and  the next one are from New Jersey where Jacquelynne lives. Hop to her blog to find more.

This is the same pattern, Joyce did hers with hand embroidery.

This will be a pocket on a bag, made in the red silk.

Some other stitching by Joyce, these will all go onto bags, so I am going to be a busy girl sometime soon.

The  fires are going all day and night, we reached a mighty 5 Celsius yesterday, ( for us here, that is low!!!)  and I am so thankful for a plentiful supply of firewood.

Quotation of the day, from Bob Dylan

“If you think the summer sun is too hot,

at least you don’t have to shovel it”

Just to show we do have snow down here

A few photos from earlier years, and some from this week. Not all at our place or nearby, but around New Zealand.

I begin with the snowfall at our home in August 2011. Magical!!!

July 2011, Josh and myself near the Central Plateau.

August, 2011, Takapari Road, in the Ruahine Range.I think this is where the quad bike turned round and came back home!!!

Last week, also on the farm, a table full of snow.

The recent cold snap has brought welcome snow to the ski fields,  a blizzard  yesterday closed  Mt Ruapehu and left many trapped  with  their cars, not able to drive back down. An avalanche down south, at Treble Cone, near Wanaka,  triggered by 4 skiers who went into an out of bounds  area .

Quotation of the day,  author unknown

It beautifies everything it covers”