I am so thankful all my northern friends are safe after the snowstorm that has surpassed all others. So many have lost their lives, emergency services stretched to the max, and travel disrupted all over US and Canada.

Meantime down here, the garden has provided some lovely blooms. Recently our Doctor and the rest of the staff were given Lilies and Callas, along with some edible goodies.We are again so thankful for all the care they have given us , but during  this last year especially. I didn't get photos of their flowers, one bunch for each  , but the tall white lily continued to bloom. Then Google gave me handy hints to preserve Hollyhock flowers. It seems you cut the stems on a slant, then sear them. Hugh had his handy gas blow torch and did the task so quickly, but it also burnt the tinfoil dish I held them over, and his workbench has some marks too.

The mauve petunias have flowered so well, I need more to fill in the whole bed there. 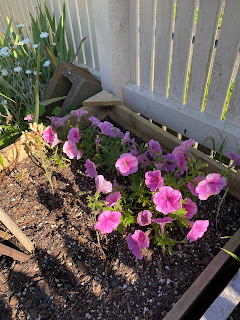 And after some helpful advice from younger daughter, I added more foliage to the lilies  and here is the result. Nowhere near as beautiful as some of her displays. I need some floristry lessons !!! 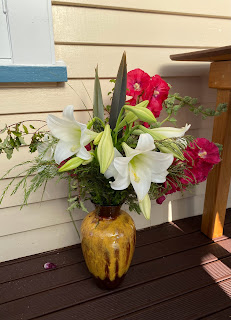 These are all from her own garden, in the far south, I think this was one of her arrangements for a friend's husband's funeral. 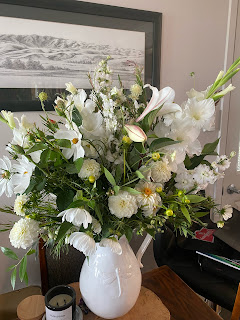 Another display of a  southern floral arrangement, summer blooms from Otago. 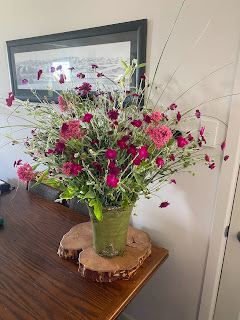 So we continue to the end of 2002, looking forward to 2023, hoping to get some unfinished "stuff" finished, given away, or discarded as in the too hard basket now.
Quotation of the day, from Rudyard Kipling,
" Gardens are not made by singing
" Oh, how beautiful" , and sitting in the shade."
Greetings from Jean.
Posted by Nancy J at 08:53 17 comments:

Season's Greetings to you all

The Christmas Season seems to be so different this year, summer here seems to be late in its arrival,  ,  and in the US and Canada, the storm has taken over everything, travel disrupted, plans cancelled, power outages, the last update was 1.5 million without power  in  Canada, with bad weather from B.C. to the Maritimes.

And while you will undoubtably have a very white Christmas, this morning we have a clear sky,  today with a temperature reaching 20C, or 68F.

The Golden Lilies with red hollyhocks showing in some places,  from earlier this year last summer. 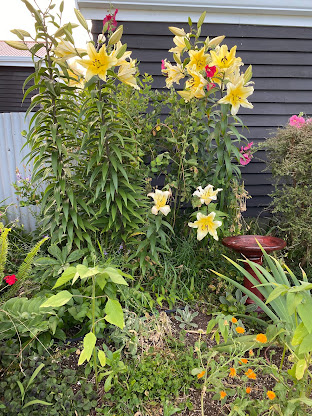 And an archive photo of Hugh and myself on my birthday some years ago, July 25th, mid winter here,  we drove up from Ohakune to the southern side of Mt Ruapehu, where the Turoa ski field is.  This is just  to show all my friends in the North that we do get snow here, and I actually have been in it.
So this is to wish you all, my dear  friends here and far  away ,  a Joyous Christmas, stay safe, stay warm, or down here, enjoy the sunshine, sea or lake .
Quotation of the day, author unknown.
" Christmas is a season of great joy:
a time for remembering the past and hoping for the future.
May the glorious message of peace and love
fill you with joy  every day"
Greetings from Jean
Posted by Nancy J at 05:57 20 comments:

While we were in Rotorua this happened

We recently had a few days in Rotorua with our older daughter. Meantime at home the flowers bloomed victoriously !!!

Last year, this was the beauty , the same colour in this year's plants, all self sewn. 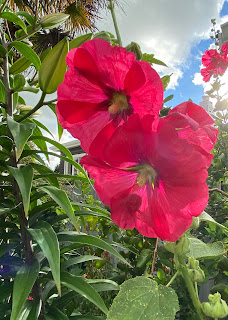 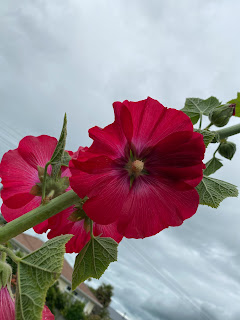 The lilies that grow shorter and in pots all bloomed. 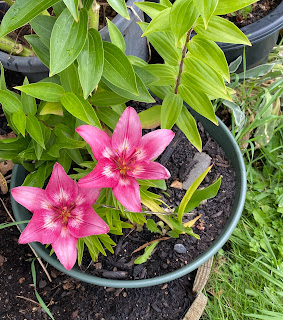 The the Japanese Iris flowered , I thought this was lost, the flowers do not last long but are so beautiful. 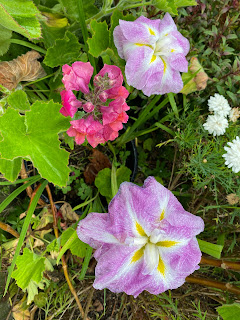 The Rotorua  feline family, Ruby,  Wally, a possible Maine Coon, and Milo, a very recent ginger lad. Milo at the back, obviously, Ruby at the front, and Wally with his tail hanging over the deck.
The lawn needs mowing again,, the passionfruit vines have died, maybe the roots got waterlogged this spring, however we can always plant more.
Quotation of the day, author unknown,
Enjoy your home, it's always a joy to return.
Greetings from Jean
Posted by Nancy J at 17:39 17 comments:

This has to be the best sale I have ever been to.

The NZ Bulb Nursery at Feilding had their lily bulb sale on Saturday, Hugh took the trailer and we arrived at about 7.30 a.m. I promised him a cafe breakfast afterwards, but we decided to go straight home, so today had a lovely morning tea at Whanganui. A small way to repay him, but did go shopping afterwards, to a BIG store.

The gates were to open at 8 a.m. by that time the cars were arriving so quickly, and when the gates were opened, the first lot of people rushed in, like it was a BIG store Boxing Day Sale.
I strolled in, according to my mature age, was given a sheet with flower colour photos, and names, and this was printed in a map form.

There were pallets with crates piled high, and a lot of customers seemed to know exactly what they wanted. Staff were so helpful. Photos courtesy of NZ Bulbs. 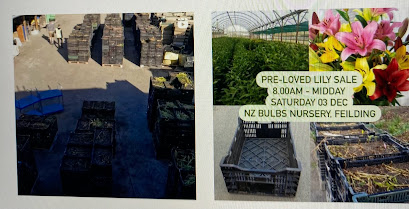 This was a screen shot of the time-lapse video, can you see the man with a brown jersey holding a crate high up? I think I am at the back of that lot of crates,White hair and dark purple jacket, but then, I could be mistaken as there were so many there. 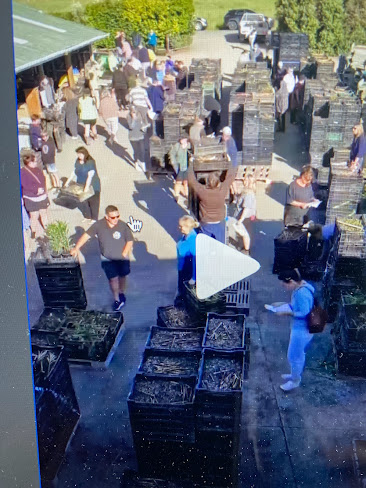 After I had chosen 14 crates, the young  gentleman and lady  staff members loaded them onto a trolley, manhandled that out to the road and loaded them into the trailer. The young couple  from near Hawkes Bay who had loaded their little car to the top...had already said they would help, as they knew how difficult it was to steer the trolley over the metal.

So we, and others, will have White Christmas, deep red, deep yellow, pale pink and deep pink flowers next season. I left the orange ones for everyone else.

And... they have another sale in January. Hugh said, " No, once was enough" as he waited so patiently, a friend wants more, so we will go in her huge wagon.

Some stay here, some for my friend, and some  going to the far south next year, with a drop off to a new friend in Waimate.