But to have a Birthday on that day is extra special.

Many Happy Birthday Wishes, Ralph, from all of us up North.

Closer to home, in our hearts, but a lot further in distance,  in Otago, is our son-in-law, Ralph. We met him for the first time on TV, with Miriama Kamo and Paul Hobbs, a 20/20 documentary  called " Dogged Determination" , filmed on the farm down south and at the dog trials there. Up to that time, we knew someone was somewhere, but WHO???!!! 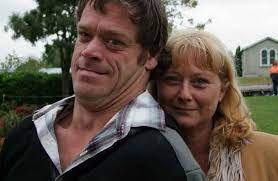 In 2020 the Waitahuna Collie Club held a surprise party, but the real reason was to honour  three former Club Presidents with Life Membership

Ralph Brown with Rogue, then Roger Tweed with Strike and his brother John Tweed with Merv.

Together they had contributed 110 years of combined service. Families and friends had gathered, and then the men thought this was a little more than an ordinary evening when even extended family members were there. 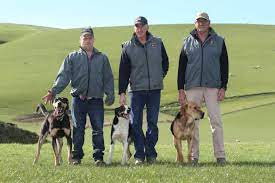 Dogs have always been a huge part of Ralph's life, and he  has participated in many sheep dog trials.  Indeed, that was where he met Kaz, when he was travelling to the North Island for an event. I think he managed to visit  on the return journey to Otago, not sure where the dog stayed!!!

That Irish Pub in Picton , the beginning of their life together.

The next photo was my attempt at trying  OOB, or Out Of Bounds Photoshop editing.

Ralph with one of his earlier dogs. 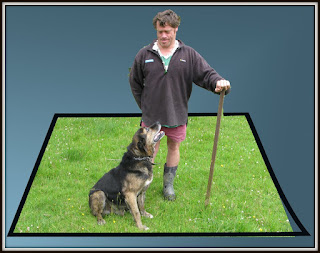 Life in Otago is  tough in the winter, guess the thought of a wet snowy paw on your face is not so welcome. 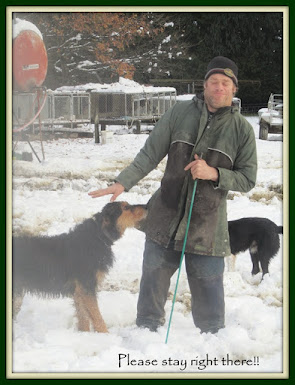 There was an early heavy snowfall that winter, but it didn't deter the Irish Snowmen from enjoying a drink or two on the verandah. 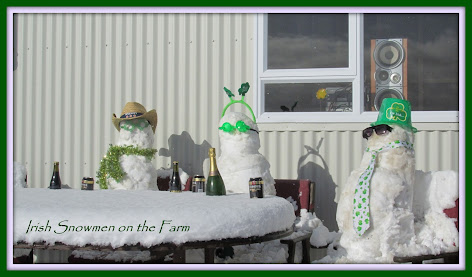 Fast forward to March 3rd, 2018.The day we had all been waiting for, their wedding  on the farm.
A  wonderful day, typical southern hospitality, and although we knew only the family, everyone else recognised us as parents of the bride. I contributed as standing in for the " Father of the Bride Speech" Hugh was reluctant to stand up there, so I carefully  worded  and then printed out a short version. I have been told I talk like I write, LOTS, so thought I should carefully limit my time. The night before the wedding, Ralph's brother  Andrew read it and replied " I think you can embellish this quite a bit more" So I did ; The Best Man enlightened us with many highlights from over the years, then it was the Groom's turn.
Ralph gave the most amazing speech, with all of us laughing so much. 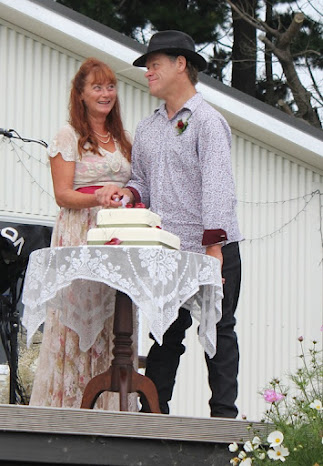 Needless to say, we are so happy that on the 17th March,  on your birthday, you will  celebrate in true Southern Style,
I think the day is taken up with the local Sheep Dog Trial preparations for the coming weekend, but I did hear a whisper of some beers, and more at the end of the day .
Enjoy the day Ralph, maybe another year when Covid-free travel is safer, we can join you  in the Far South .
Quotation of the day , author unknown,
" Families are the compass that guides us.
They are the inspiration to reach great heights,
and our comfort when we occasionally falter."
Greetings from Jean.
Posted by Nancy J at 07:25 11 comments:

Thanks so much, again, to you all, The reality of a diamond Wedding Anniversary has finally taken hold, amidst the strife, terror and more overseas, and here with our Covid cases rising so rapidly every day.I know how fortunate we are to be safe, still together, and have family, and friends here and abroad to be with us, in reality, or by virtual wishes.

Celebrations held by Zoom, or FaceTime ,  seem to be the norm for now.

The  one photo I missed in the recent posts was our cake. Carrot and walnut, two layers with delicious filling,  pale grey lettering, all on a wonderful large cake board. That has been saved  in case another occasion happens. 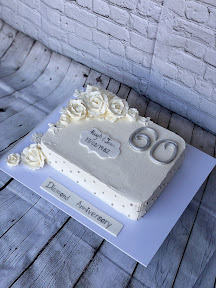 Some was saved, and will be safely  frozen up to 3 months.

The garden flowers are blooming for Ukraine right now. 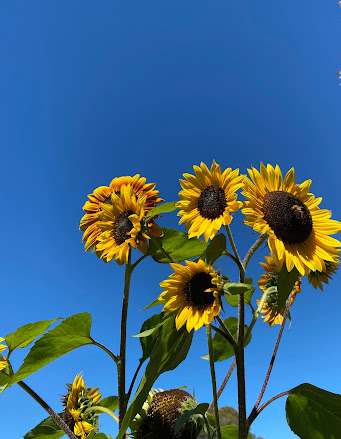 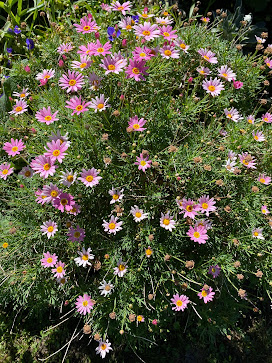 And nearby, the pink begonia keeps the daisy company. 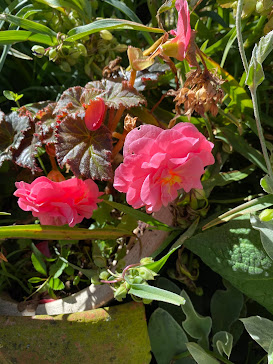 A long way further south , from our daughter's garden , is this beautiful arrangement.
Gladioli, dahlias, Delphinium, Cosmos, Lilies and some bottlebrush leaves.
This would grace any table at any event so beautifully, and as the date nears for their wedding anniversary, I hope some are still blooming after the rain that is forecast. 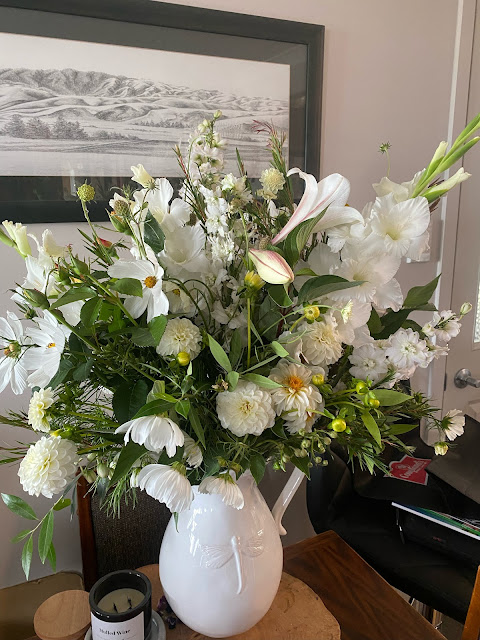 On the wall is a pencil drawing of the local area, Waitahuna, by a very talented local artist Kaye French.
Quotation of the day,  from Ralph Waldo Emerson,
" Flowers are a proud assertion
that a ray of beauty out-values all the utilities in the world"
Greetings from Jean