Traditionally Boxing Day was the day when tradesmen came to the door, probably the “ Tradesmen’s Door’ to collect a box, which would contain small gifts, in recognition of their service through the year. As well, when servants had worked on Christmas Day, they had the following day off work, and  then visited their families, taking a Christmas Box of gifts. Now we have it as another day when some shops and businesses are closed,
when families will travel to their holidays after spending Christmas Day at home.
Our boxes arrived, some  by courier, some  hand delivered, and some  given a few days before The Day.

I always think the most excitement comes before the opening!! Will I shake it? Will it be soft?
Can I even guess what is in the box?  This was for Hugh, then  he suggested that I might like to carry it in my pack!!! I declined.
It comes with  a very neat carry bag, all self contained, folds up so it can be put in the pack( WHOSE PACK?)
very easily.I am sure it would dig him out of a hole if necessary!!!

This was definitely for me, luxury in a bottle and box.
Olive Oil goodies, from the Simunovich Olive Estate, Bombay.
The pamphlet gives details of many other products they make,
using both the olive oil and olive leaf.

Dove body wash, just right for home or  away.


Again, my presents, assorted tea towels, from  Annette and Kaz.
My colours as well, Thanks so much. I have always liked to have
new tea towels, so they are washed and in use today.

Look at this!! My own drink bottle, BPA free, stainless steel, then read the small print.
NOT  Dishwasher Safe.Use lukewarm water and drip-dry!!!
Well, I will probably be using it in some way out camping spot, no chance of any mod cons there
.

The usual camping spot Hugh chooses is  far away from civilisation, has no cell phone or laptop coverage,
running water is some distance form the tent, and down very steep steps, where it gushes from a huge pipe.
The toilet is of the long drop variety,  (For those not familiar with that term, an outhouse over a deep pit, a wooden seat,
and, hopefully , a door, and  hopefully  with a latch)

This photo courtesy of the Internet, is the long drop at Goat Peak.
This is on  the highest point of the American Ridge in Washington, and is where a fire-lookout was.Imagine that view for the summer season!!! 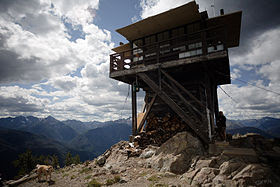 A second look at the Internet and it tells me that the fire look-out is there  at Goat Peak, elevation 1,700 metres, and is in use. Photo  courtesy of the Internet.No wonder it is tied down with wire straps.

Thankfully some of the outhouses in NZ are not on such a precarious site. However I have heard of some in the Southern Alps
areas ( in NZ) where the wind factor is scary, the sheds are tied down to rock with wire ropes, and you take a risk using the facility.
In the winter more preferable than the snowy outside!!!

Quotation of the Day by Ralph Waldo Emerson
“To be yourself in a world that is constantly trying to make you something else is the greatest accomplishment”
Cheers from Jean
Posted by Nancy J at 11:10