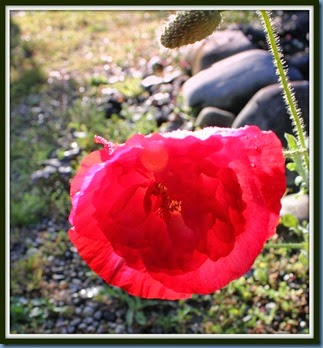 Today, April 25th, ANZAC day, a commemoration of the Australian and New Zealand Army Corps, with ceremonies held throughout our country and overseas. 2015 is the 100th centenary of the landings at Gallipoli, and many of the people attending there are from here and Australia. Dawn Services have been held, veterans marched, hymns sung, and in Rotorua  our grandson, Josh, has attended the dawn service at Muruika war cemetery at Ohinemutu.  Prefects and house captains from Rotorua Lakes High, along with others,  will be there, a privilege and an honour.

The  poppy was one of the first plants to grow  and bloom in  the mud and dirt at Flanders, and is a symbol of remembrance of war. A poem by  Canadian physician  Lieutenant Colonel John  McCrae, ( born in Guelph, Ontario, Canada) who wrote it after presiding over a funeral of a friend and fellow soldier, Alexis Helmer.

Tears have been shed, memories talked over, friends and comrades gather together, and we here accept and acknowledge the sacrifices made, for those who left our shores, fought, lost their lives, or returned to be a part of New Zealand again.

Hello Jean, a lovely tribute to the veterans of your country..They are all heroes..I am sure the field of poppies is beautiful. Have a happy weekend!

A lovely tribute, Jean. My last employer (of over 20 years) and where I retired from was the head office of the Royal Canadian Legion. We owe our freedom to all who served.
Florence

What a wonderful tribute to a celebration of veterans for your country. Carol

Always wonderful to see any countryman honour it's soldiers, Jean!

Our kids went to John McRae School in Guelph, just down the street from his house, now a museum.

That was a wonderful tribute. I'm glad that no one is forgetting.

Remembering sacrifice - the poppy is a fitting symbol.

A really beautiful and touching tribute, Jean. Thank you so much for this.

Beautiful tribute, as a gardener I appreciate the tying in of the blooming of the blood red poppies with the loss and memories of the fallen soldiers who gave their all for freedom for others. But eternity can compensate for their losses here.

This was very moving. Thanks so much for sharing. I really did like the poem!