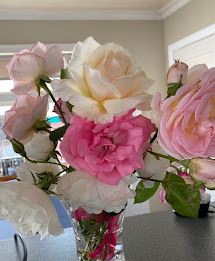 Thank you all so much from my heart for all your loving, caring and so thoughtful words. Moxy was such a vocal boy, and always told us when he was coming in, or going out, or just plain wanted a meal. A friend called in last Wednesday with these roses from her garden, we have shared our cats' lives and losses for some years now. Then on Friday his previous Mum called in, roses also from their garden. 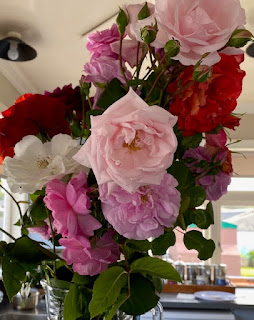 He has a long story that began in Australia in 2007, he was microchipped and registered at the Australian Animal Registry in August the same year. Soon, he was flown to New Zealand where he was a stud cat for 2 years or so. He HATED being kept in a crate, not sure how large it was, but maybe not much room to walk around,. He escaped several times, and when he was found, several miles away, the first owner said to the new ones, " You might as well keep him, I will have him castrated so you cannot use him  for breeding" 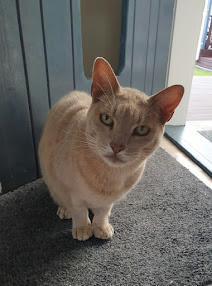 His new family moved to a country area ,  several miles from here, then back to our small township, and they are living 5 houses up the same street, just on the other side.

He was SO loved, and was named " Pat" as after being a crated stud cat, it took at least 2 years before they could pick him up or pat him, so it was PAT me if you can.He shared his home with other cats, and last Christmas his Mum and Dad were away for one night,. During that time some other animal came in, mauled one of the other cats badly, and Moxy fled. We did see  him wandering up and down our street, walking into gateways, coming to our back door, and we  wondered where he had lived. Many phone calls, internet and lost pet searches, but no luck at all. However  the local vet clinic had been notified, maybe his description was not matching their details.

Shortly after this he came in the back door, very cautious. He was hungry and so happy to have a feed.

A few weeks later I took him to our vet clinic for a check up, as by this time he was sleeping inside. ' I don't suppose he has a microchip? "  I asked. The vet scanned him and sure enough, he did. A quick check up and the  registration number wasn't found in the New Zealand Registry.  I came home and did some research, looking at every registration site, and finally found his number, registered in August 2007, in Victoria.

Roll on another week or so, and one morning about 7 a.m. I walked up the street calling him, as he had wandered out. There he was with his previous Mum, she said " Are you calling your cat" Yes, I wondered where Moxy had gone. She replied " Well, actually he is our cat and we call him Pat" Oh dear, he should go home to you, and then she told me about the Christmas saga,. She thought he was too scared to go back and suggested we keep him. His Dad has since said " Well, I have never been dumped by a cat"!!! 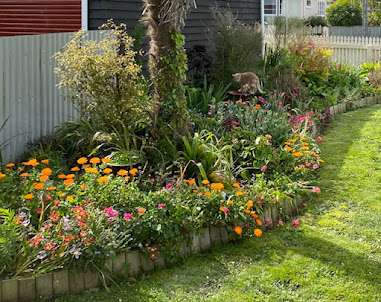 He did go next door, and  loved our bird bath for a drink and almost a dip. Maybe his last photo in October.

On Tuesday afternoon, I saw him by our front gate, just sitting quietly. About 5 minutes later, I left the dinner cooking and looked down our drive.   I cannot describe my feelings, and thank you all so much again for caring, sharing our loss, and more.  Phone calls, emails and texts have all shown me how much  our family and my friends care, all over the world and here in NZ., Our friend Lance came and dug a grave, and Hugh has made a beautiful varnished name sign.

Life must continue, and after my Dad died, I had the honour of donating his bowling bag and set of outdoor bowls to the club he had been a member of for many years. The words I spoke went something like this...

"Do not hide my name away, but speak of me with love,  continue to do what we once did together  and have memories of all our happy times."

Memories are golden, store them safely, visit them every day, with joy and sadness mingled together.

I am happy you rescued Moxy when he needed a home. Thanks for sharing his story. Memories are golden, I like to think of the happier times.
Take care, stay safe! Have a great week ahead.

Moxy certainly had his share of adventures. Many known only to himself. Very surprised that he was originally exported from Australia. A lovely tribute to a gallant little chap.

Oh dear Jean ~ I am so sorry for this loss. It hurts my heart, makes my eyes fill with tears. Your last two quotes spoke to my heart. It's coming up to 8 years since God called my dear husband home and I miss him and love him so much. ~ Love, hugs and prayers for you ~ FlowerLady

What a heartbreaking story, Moxy was very lucky to find you and find contentment with you.

I'm so sorry, I can feel your pain and I know few things hurt more than losing a beloved pet. You wrote a beautiful tribute to Moxy, Hugh made a beautiful sign for him, and then you found a wise and meaningful quote. I will copy it and I thank you for it. And I am so very sorry for your loss.

As you know, many kitties pass through my home, but all leave footprints on our hearts.

He was lucky to have two loving homes. It is always so sad to lose a family member no matter how many legs they have.

Moxy had quite the interesting life, but I think the best of it was with you. So sweet the way he was cared for by you and the way so many are caring for you from near and far. They are remarkable creatures, with distinct personalities, that make their marks on our lives. Blessing as you recuperate from another shift in 2020.

What a fun story, he was meant to be with you.
As you know, we've lost 3 black cats to vehicles. It just isn't easy. xx

Moxy had a tough start in life, Jean. Thank goodness that he ended up with a kind family who helped him recover from his earlier experiences. And then he found you and Hugh ~ Lucky cat! Our beloved pets always stay in our hearts. May Moxy bring you lots of wonderful memories! Hugs to you!

So happy you got to enjoy his company for the time that you were able to. He had a happy home once he got away from that breeding prison!

Moxy sure had an unbelievable story of a life! Glad you were able to piece it all together, and glad you gave him a loving home. Such a great pic of him on, almost in, the bird bath.

You truly rescued Moxy and gave him an incredible life. His early life was so difficult that I feel sure that he knew that he'd hit the jackpot with you. I know how hard it is so I am sending you love and sympathy. You will always remember him.

Such a lovely story about Moxy. He sure led an active and intention filled life! I hope you will get over his loss without too much pain.