This morning there have been a series of strong to severe earthquakes in the South Pacific Ocean area. The first one was 105 km off the northern East Coast,  7.1 in magnitude, and there were over 50,000 reports, from mild to severe. It was classed as severe. We heard the rumble, then the shaking, that seemed to go for nearly a minute. No damage for us. In other places shelves rattled and the bottles fell, pictures rattled, dogs sounded the alarm for their owners before the shaking began.

Then at 6.41 a.m. a second quake off Raoul Island, 7.4 in magnitude, and this was followed by a 8.1 quake at 8.28 a.m. near the Kermadec Islands,  The East Coast, coastline area that extended for many kilometres , part of the top West Coast coastline as well,  were in Tsunami alert, sirens blared and many hundreds of homes were evacuated as a precaution. Long lines of cars, as people went to an inland higher area.

Finally, after a few larger surge waves, and several hours,  the all clear let them return to home. 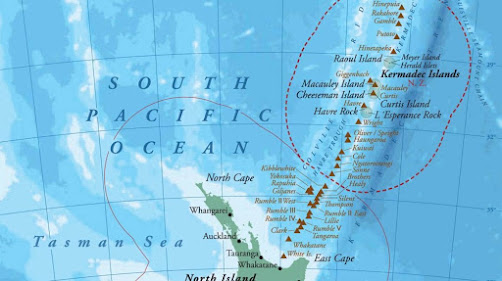 We live slightly below where the New Zealand map finishes, but friends further north were alerted and phone alarms went off frequently.

Raoul Island has no-one living there at the moment, and it is a base for a weather and radio station. The station has been empty since March 2020 ,and last week a Navy vessel was due to take a crew out, but this was cancelled because of the Covid 19 alert level changes in Auckland.

In other news, I have finally had a pre surgery assessment, height, weight, blood pressure and so many health questions. The good news, I am so happy, cataract surgery will be on a Tuesday morning before the end of March. So I am watching the mail for a letter, or hoping the phone will ring very soon.My right eye, this time, and they cannot tell me when my left eye will have the same surgery.However, this is a start.

" Head to the hills, this might save your life"

Like the quote. So pleased there were no damaging waves.

Now that we have moved to the Big Island of Hawaii we are tuned into all the Tsunami alerts as well. Glad that you were not more impacted by the big earthquakes today and I'm very glad that there was no major tsunami issues for anyone. Note we live 450 feet above sea level and 9 miles from the east coast, so we have no real concern other than lava and rain here. :)

I hope you find out the exact date and more information (including when your left eye will be scheduled) soon.

The earthquakes and the tsunami sound scary, I am glad you were OK and there was no damage.
The quote is perfect, head for the hills. I wish you good luck with the eye surgery, it seems to be a common surgery lately. Take care, have a happy day and weekend!

I just saw the earthquake news on the morning newscast, and came directly to you to see if you were OK. Thanks goodness it didn't seem to cause catastrophic damage, the reports were really unclear about that. Glad you are fine, and hope your surgery goes well.

I watched the news about the quakes north of New Zealand. I am so glad everything was okay.

So glad you are all safe. I heard about this here, of course, and wondered where you live. Now I sort of know. So far away. I had cataract surgery a few years ago and it was simple and fast. They did one eye at a time as well.

A scary time for all impacted by the threat! So glad you are soon to have your cataract surgeries. Been there, done that. It's going to be wonderful once it's done.💖

Earthquakes are so scary and I wonder if they are connected as 10 years ago there was the big one at Christchurch and soon afterwards the big one here in Japan. Head for the hills is right!!

WE didn't feel any of the earthquakes so didn't know about them until we listened to the news. It was scary to have the tsunami warnings, and that kept us glued to the TV news for a while, luckily living in the lower North Island we weren't impacted by this danger.
Great news about your upcoming eye surgery, I've had it done a while ago, and it really is nothing to worry about.

I had cataract surgery last fall and it was simple and very effective. I am sure you will be very happy with the results. And we are all thankful that the tsunami did not materialize.

Coloring Outside the Lines said...

I'm so glad that you are safe and that no one was hurt from the earthquake or the waves. I live in anxiety world the entire tornado season here, and to make matters worse, the season now happens off and on in all seasons. I can't imagine worrying about a tsunami wave carrying everything I love away, much less a big earthquake!

Hopeful that you will get your eye surgery soon. My mom and my grandpa both had that, and I have the beginnings of it in one eye.
Stay safe and have a good weekend.

I have been thinking of you since hearing the news of thequake. So glad you are safe. We had a rather strong quake recently but nothing fell. Only the grandfather clock stopped. It was later declared as an after-shock of the one ten years ago. I will be thinking of you as your cataract surgery nears. My mother was so pleased with the difference it made in her life.

Oh Jean I have been praying all is well with you and Hugh. I am so grateful you all are alright. Be prepared for more shocks in coming days. Hopefully, not like last week. I know you are anxious to get your eye surgery and I am happy you slowly progressing. These things take time and can try us. Hang in there. We are all pulling for you. Carol

Those earthquakes and tsunamis sound serious. Glad you were undamaged! I'm sure your cataract surgery will go well, take care.

So glad you are safe! Cataract surgery was easy, for my hubby. He got both eyes done one summer. You will be so and sew happy with the results!

So happy to hear that the end is in sight (forgive the pun) for your surgery date, not long to wait now.

I am so glad that you are just fine. That is a long distance from you... and I hope that the quakes stay away from you!

Yay on the right eye. You are right - it is a step in a good direction!

Oh dear, as if there is not enough to concern ourselves with...earthquakes. So glad you were not affected as such. Now then, it will be marvelous to have your cataracts taken care of. Tony got both his done at the same time with excellent results. They've fine tuned this procedure. So fingers crossed and the best of luck!

How scary with all of the earthquake activity! So glad you are okay. Keeping you covered in prayer for your eye surgery. Thank you for your prayers for our son Zack. take care

Earth quakes are scary for certain, especially when they it close. Glad to hear that you faired well through them. By now you've likely had your surgery. And if anything like what I've heard are seeing better than you can recall ever. Any schedule for the left eye? Take care my friend, happy Springtime from San Diego, CA. Sandi

Somehow I missed this post, Jean. Earthquakes can be scary. I'm glad people came through well. I hope your first cataract surgery is successfully behind you now.

Hope your surgery went well, Jean. I remember being at the ferry loading area in Picton when NZ had an earthquake. Surprise!

Just stopping back by to say hello and hope all is well with your eyes and that all is still and not shaking.

I hope all went well with your eye surgery.
Sending healing prayers! Take care, have a happy weekend.