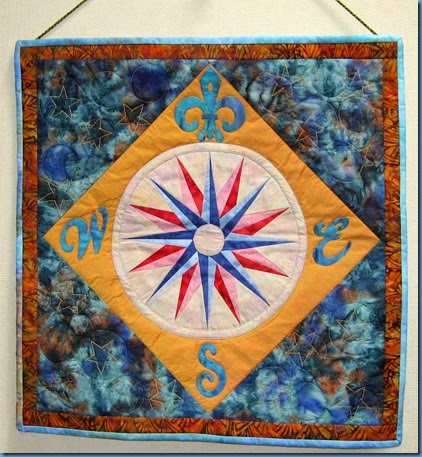 it sounds like he was a very good man with eyes that noticed much. thanks for sharing his 'thank you' letter.

If some of you think I haven't been reading your posts, I have, usually first thing early in the mornings. Life has been extra busy, Hugh is not the best right now, and ( for me, never lost for words!!!) leaving a comment is hard if I try not to reflect our troubled days. My posts get longer spaces and days between, but reading all of yours, seeing the comments you get, is keeping me afloat. And when I read of others who have their man really ill, it tends to put things in perspective down here.

Beautiful words and a lovely tribute. And the wall hanging you made for him is so lovely. I wonder that you didn't tell us his name....

here is the link to the post I did about Walter Drake, I didn't put in his name out of respect to his family, who might not have had the chance to read these words of his.

I love that Mariner's Compass and the words are so true. Thanks for sharing them.

Dear Jean ~ What a lovely tribute to you friend, and how neat to have your lovingly made piece hanging in a museum in his honor.

You and Hugh are in my prayers.

Love and hugs for the both of you ~ FlowerLady

What a lovely letter, your friend was a good man.. I love the wall hanging. Lovely tribute to your friend. Have a happy day and week ahead!

I fully agree about caring volunteers. They run so much of our social services, as well as all the minor sports, churches, community events, hospital fund-raising, and the list goes on. Everyone should give something back to their community. Sorry Hugh is not well.

What a lovely tribute to your friend, Jean. It has finally been 'published'!
And, what a deserving tribute he made to the many people who volunteer their services every day of the year all over the world.
And look at your artwork there....hanging in a museum for generations to appreciate.
Lovely post.

Dearest Jean, all you need do is take of Hugh and we post whenever you can. For we are here to brighten your day as much as we can. I loved your story and were it not for Volunteers I fear we all would be in a world of hurt. Stay safe. Carol

This was a beautiful post. Your quilt that you made for your friend is elegantly beautiful. What an honor to have it hanging in a museum!!!!! It deserves to be there - it is truly a work of art.

I'm so glad that you published your friend's words. They are heartfelt and show his true character.

Your quilt square is lovely, a beautiful tribute, and worthy to be hanging in a museum. We were involved with caregiving for my in-laws for many years, it's great if family members can care for the elderly, but it seems like assisted living is more usual now.

You know you are loved, Jean. You make a difference in many lives.
It's a shame that the minister couldn't simply let another MC the celebration of life.

We only matter to those who love us, and this is such an important time to honour them.
The journey of caregiver, in your present role, is a difficult one. I'm sure you are learning a lot about yourself.
Many, many hugs, my dear. You are loved, as well. Take your time. Do what you have to do. Refrain from the thing you are unable to manage, or that drain you! XO

A beautiful tribute! I do hope you are managing with Hugh. You are in my thoughts. Stay strong.

What a warm and full-of-love post, Jean. Such a fine tribute.
I love your amazing wall hanging and I know how proud you must be to have it displayed there.
Love, Jean

This is truly uplifting. We have many volunteers around here, as well.

Your quilts are wonderful. What a terrific hobby.