Some Bocks from the US tour

I have joined in the " Round the Block, US tour" and each Sunday evening a new block from a new state in USA arrives by email.

With each new block from a new designer, lots of information about the state, so a Geography lesson at the same time. The other photos eluded me when I tried to insert them. 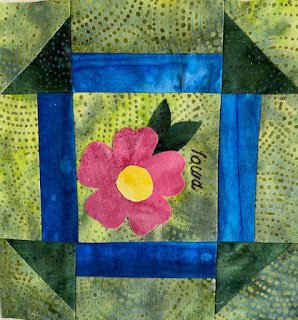 Just in case you think we have not had snow at our home, here is our previous home in August 1997, the one and only snowfall I have seen, at any time and anywhere I have lived. It was magical. 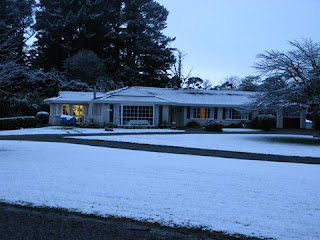 A   fond memory from years ago, my Dad, myself and Tip the farm dog, as we sat on the foundation of the new hay barn at TeHihi, which was a 100acre farm , sold, and then cut into lifestyle blocks, expensive beyond what my Dad would never have thought possible This might have been about 1950 or so. 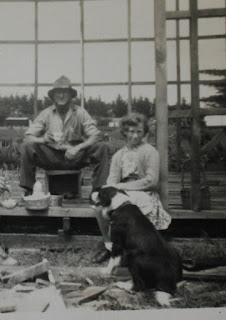 Here is the view of the Central Plateau, as I flew from Palmerston North to Auckland for a funeral.This was some years ago, and the view was stunning.
Mt Ngauruhoe, 2291 metres,  an active volcano, and Mt Tongariro,  1978 metres, we had passed Mt Ruapehu , 2797 metres, slightly to the south of these two,  where most of the North Island skiing is done. 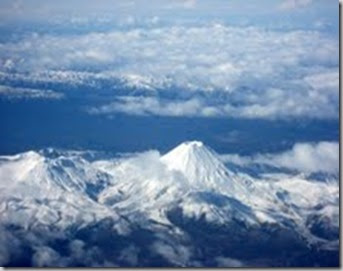 This  is the wall hanging I made for my dearest friend  Walter, when he was ill in Auckland Hospital. He was in HMS in WW2, and the staff hid the parcel until the morning of his birthday, then hung it in his room. After he died, his daughter sent it to the Felixstowe  Museum, where it is hung on the wall . The WW2 coastal Forces base was at Felixstowe , and this was where Walter was based,I consider that the highest honour of all in my lifetime.And naturally, the title for my blog was inspired by  the memory of Walter and how much the compass played  such an important part of every day as he patrolled the seas off the coastline of Europe and back to England. 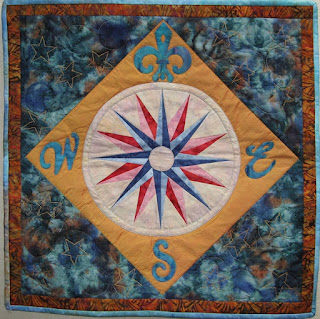 The latest news at home, tomorrow, at long last, I have the treadmill test, and again, highly probable I will go to Wellington again, after another ambulance trip to ED. The scary angina continues to occur at random times, and the staff are getting used to me, one lady Doctor, said " I remember you from a few weeks ago" Pity I don't get any frequent Flyer points.
How do you tidy the quilting fabric, the scraps, bits of sewing started, and projects waiting, in 3 days?
I hope there might be some time at home before the next flight.
Quotation of the day, author unknown
" Memories are timeless treasures of the Heart"
Greetings from Jean
Posted by Nancy J at 20:34

The Round the Block tour sounds fun and interesting, it is a pretty piece. I like Walter's compass hanging. Your old photos and memories are treasures. I will keep you in my prayers, I hope all goes well with the treadmill test and doctor visit. Take care, have a happy new week!

It must be so scary having those attacks. I hope you have had the test already and are on the way to helpful treatment!

Your country is so majestic and gorgeous. I like the idea of the US tour with each state represented. And I have your owl on my wall and think of you when I look at it.

So sorry you are continuing to have the problems with your heart. Virtual hugs to you, and hopes that a treatment will be found soon.

All the best, Jean. I love the memories photos, as well as the sewing plans. The best photo is the volcano!
I hope you keep well! xx

I enjoyed all your memories. How lovely that your tapestry is at Felixstowe Museum.

So sorry to read that your angina is still giving you problems. Best of luck with the treadmill test, they are not at all fun to do, I understand

Hang in there Jean. You can do this. You can. Carol

Nice block Jean!! Thanks for sharing your memories, I love a good trip down memory lane, and such a beautiful view of the mountains/volcano. When we lived in Wanganui for a year in 62/63 my bedroom window had a view of Mt Ruapehu and I loved seeing the mountain, all the colours of the rainbow reflecting off the snow. Good news about the treadmill test at last - I'll keep in touch.

Nice seeing all the memories. Isn't nice that fine compass has a place of honor. I hope it won't be much longer before the medical profession comes up with a better solution than constant testing. Prayers flying across the pond.

Snow is magical... at first! Beautiful photos, all, especially that view out the plane window!! Good luck with your upcoming tests, thinking of you often.

I've always wondered where the title of your blog came from.

Yes, your compass block and the story behind it and the name of your blog is so nice.